“The leading non-medical problem confronting people with epilepsy is discrimination in education, employment and social acceptance.” Few people know of the tremendous price that individuals with epilepsy pay for having the disorder. This is also true with other diseases, but in the case of most disorders, they are now publicly acknowledged, and openly discussed in the general population. In some cases there is a public spokesman for the disease, and serious fund raising efforts. Not so in the case of epilepsy. There is still widespread discrimination, social isolation, and stigma attached to the illness, much of it based on misperceptions, and cultural beliefs. There are many famous individuals who suffer from this disease but are unable to “COME OUT OF THE CLOSET” and speak on behalf of epilepsy because of the above mentioned reasons.

The incidence of epilepsy is greater at ages under 15, especially as you get closer to birth, and for folks over 65. For older individuals, while seriously impacting their life, it does not have the same results as when young children have epilepsy. For older individuals, they have had a life, they have an education, a profession, and possibly a family. For young children, their development is interrupted and in many cases arrested, they have never known what a “normal” life feels like.

Fear and anxiety becomes their companion. They may have trouble in school, feel insecure as they witness the discrimination and feel the stigma associated with having this illness. Some are outright bullied and made fun of by their peers. As their life develops, there is a constant cycle of visits to medical practitioners, medications and social isolation from their peers. Over time many become depressed. In the worst case some try and others are successful in committing suicide.
As they grow older concerns such as dating and marriage are an issue. Will they find a life partner?, Can they support themselves?, Can they drive a car? If they tell the truth on a job application, will they get the job? Life becomes very secretive and inwardly focused.

The impact on the family also cannot be understated. Many with epilepsy live at home, sometime most of their lives. During the early years the parents have the same concerns as their children, plus the added burden of constantly trying to find the treatment that will improve their child’s life. The parents spend their lives taking them to the doctor, to the diagnostic center, to the psychologist. They never stop trying to find something or someone to help their child, this takes a toll on the child and the parent as they become more and more frustrated for the lack of answers to their plight.
All of this is happening while trying to live a “normal” life.

Here are some of the identified problems –for individuals with epilepsy:

Quality of life is a person’s subjective sense of well being. This stems from the satisfaction with one’s roles, activities, goals and opportunities which a normal person usually hopes for and expects, A clearer explanation of the impact on the quality of life, can be seen in the associated graph. The data was collected in 2005 and was reported out in 2008. It gives a view of the quality of life for individuals in several categories. It also shows three markers of quality of life and a fourth provides the summary. 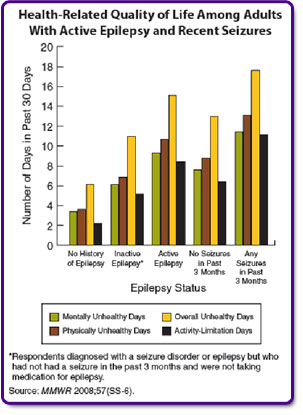 The most telling marker is Overall Unhealthy Days (Yellow) a month. To put numbers to that marker,

The life of a person with epilepsy, controlled or uncontrolled, is not easy. There are a host of possible psychosocial related issues including possible behavioral problems including aggression, hyperactivity and inattentiveness; emotional problems such as depression, anxiety, and reduced independence and low self esteem. There is also the problem of social isolation. All of these contribute to the quality of life, or lack thereof.

Tragically, Nina was in the latter category, she had continuing seizures until her second surgery. If we follow the graph our Nina had an average of 12 healthy days a month where her quality of life was good.

What a rare individual who could accomplish so much without complaint, and still be an outstanding daughter. We continue to be amazed at her courage and fortitude. As parents we never knew the extent of her suffering for she was known by her beautiful smile which adorned her face and brought happiness and hope to so many